Search For AirAsia 8501 Set To Resume 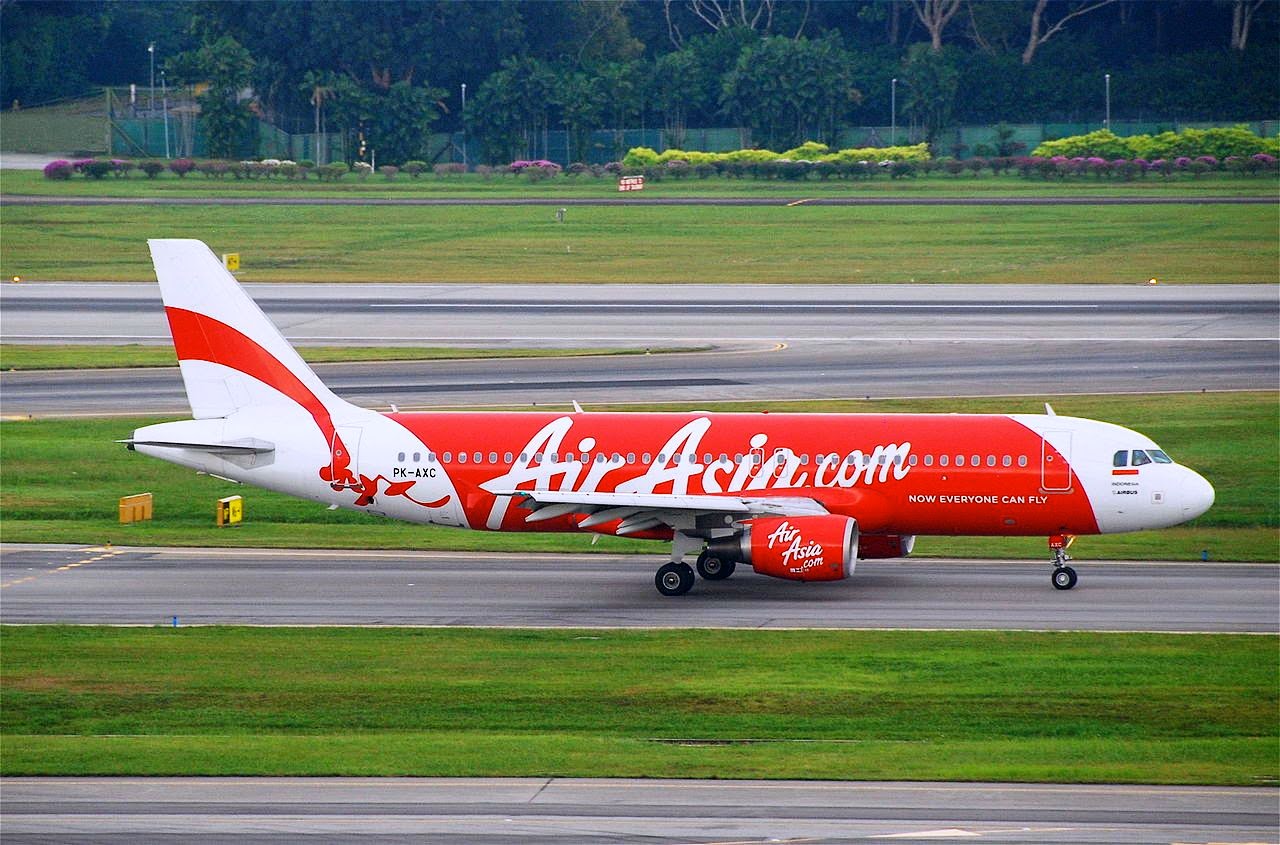 The search for AirAsia Flight QZ8501 will resume in several hours at first light (05.30 WIT). While the search is technically still at the rescue stage, Indonesia and Singaporean search teams know that as each hour passes, the operation is increasingly likely to become a recovery mission. Searchers still have a great deal in their favour. The waters of the Java Sea are shallow (about 150ft) and the area is has a multitude of islands, including Belitung Island, the closest landmass to the aircraft when it disappeared from Indonesian ATC radar at 06.24 yesterday.

The Air Asia flight encountered heavy storm fronts and had requested to climb to 38,000 ft. It's believed that many of the 155 passengers were travelling for Christmas and New Year celebrations. Famalies of the missing passengers spent a difficult Sunday night in gathered together in Surabaya, Indonesia awaiting news.


Indonesia AirAsia Flight 8501 (registered PK-ACX) was a scheduled passenger flight from Surabaya, Indonesia to Singapore. The aircraft was an Airbus A320-216 (using CFM56 engines) and it went missing over the Java Sea on 28th December 2014 carrying 155 passengers and 7 crew on board. Records released soon after the aircraft went missing show that the A320 first flew in 2008 and had a full maintenance check last month.

AirAsia is a low-cost budget airline based in Kuala Lumpur, Malaysia. The company was founded in 1993 and this is its first ever suspected hull loss. The accident is the third in 2014 involving a Malaysian airline or its affiliate following the loss of Malaysia Airlines Flights 370 and 17.

The flight took off from Juanda International Airport, Surabaya, at 05:35 Western Indonesian Time (WIT) and was due to arrive at Singapore Changi Airport at 08:30 Singapore Standard Time (SGT), with a flight time of less than 2 hours.

The plane was under Indonesian air traffic control when the crew requested to deviate from its original flight path due to heavy tropical storm fronts at 06.13 (WIT). This was the last radio communication Indonesian ATC had with the crew of QZ8501. The area where the aircraft went missing is part of the Inter Tropical Convergence Zone (ITCZ). As part of the flight deviation, the pilot requested a slight left heading change and an assent from FL320 (32,000 ft) to FL380. Storm clouds in the area reached up to 50-53,000 ft. 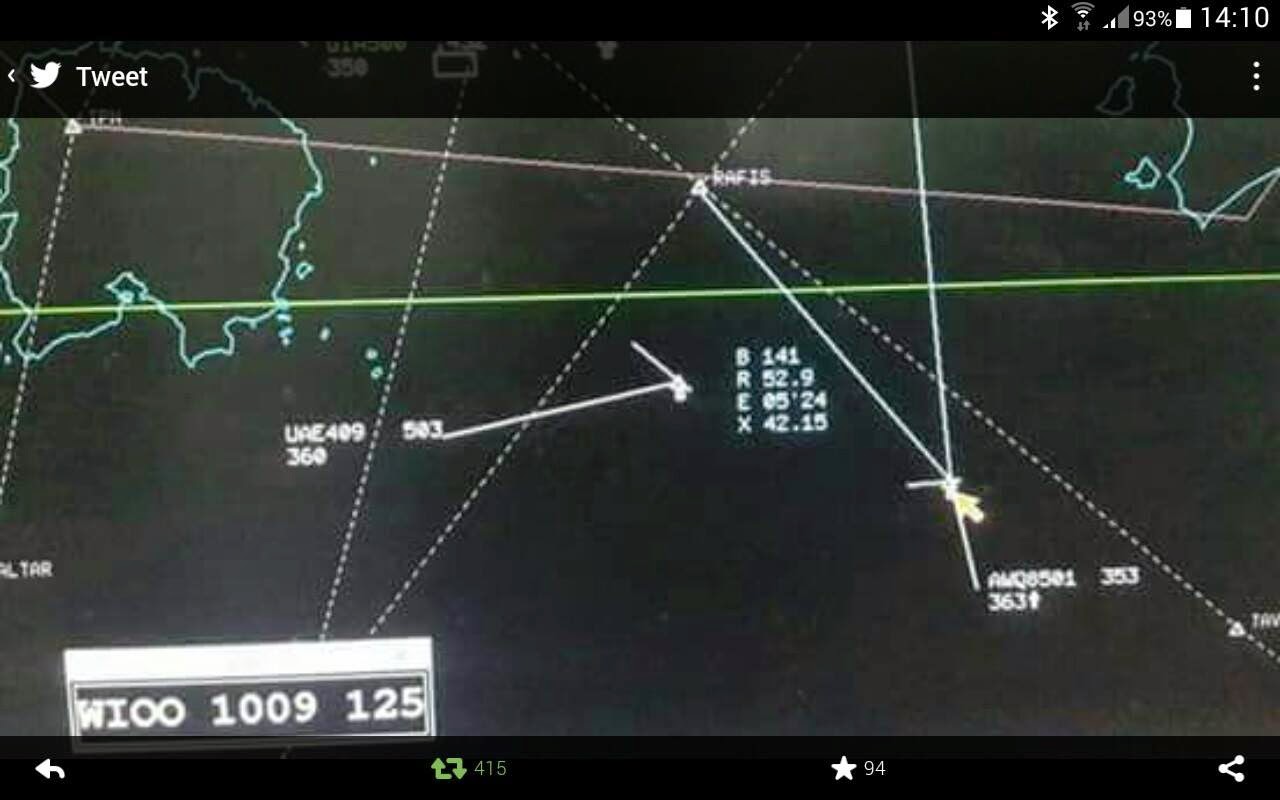 ATC lost radar contact with QZ8501 at 06:17 WIB, though there are conflicting reports when exactly radar contact was lost or last seen. Some reports have referenced 06.24 (WIT). There was also an initial report that the aircraft's ADS-B (Automatic Dependent Surveillance – Broadcast) was still sending positioning data via satellite for up to 30 minutes after it went missing.

There is some concern at the speed of QZ8501 at the time of its ascent to FL380. Flight radar released after its disappearance shows a speed of 353knts at an altitude of 36,300 considerably slower than a similar flight in the area flying at FL360. 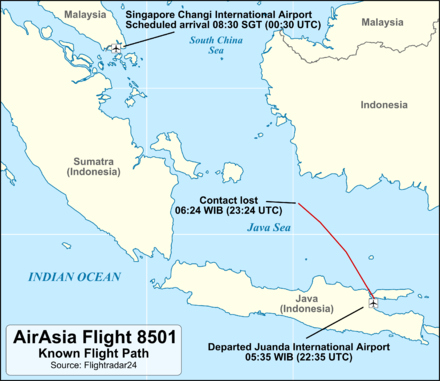 The flight crew did not send any distress signal during any communications with Indonesian ATC.


The aircraft was officially declared missing at 07.55 (WIT). Indonesia's National Search and Rescue Agency deployed seven ships and two helicopters to search the shores of Belitung and Kalimantan. The Indonesian Navy and the provincial Indonesian National Police Air and Water Unit each sent out search and rescue teams. In addition, an Indonesian Air Force Boeing 737 reconnaissance aircraft was dispatched to the last known location of the airliner (3.2466°S 109.3682°E).

The Indonesian Navy confirmed that it had dispatched four ships by the end of the first search day, joining the initial search efforts. Further aircraft, among them, a CASA/IPTN CN-235, have also joined from the Indonesian Air Force. The Indonesian Army deployed ground troops to search the shores and mountains of adjacent islands.

Singapore's Rescue Coordination Centre (RCC), managed by the Civil Aviation Authority of Singapore (CAAS) and supported by various agencies, including the Republic of Singapore Air Force (RSAF), has also initially deployed a C-130 Hercules aircraft to aid in the search and rescue operation. An officer from Singapore will be deployed to Jakarta to coordinate with the Indonesian authorities on the search operations, and two more C-130 Hercules aircraft will be deployed for the second day of the search and rescue operation.

Malaysia's government has also set up a rescue coordination center at Subang and has deployed three military vessels and three aircraft, including a C-130 Hercules, to assist in search and rescue operation.

Air search operations were suspended on the evening of December 28th due to darkness and resumed at 05.00 (WIT) on Monday, December 29th.

The Load and Trim Sheet is displayed below: 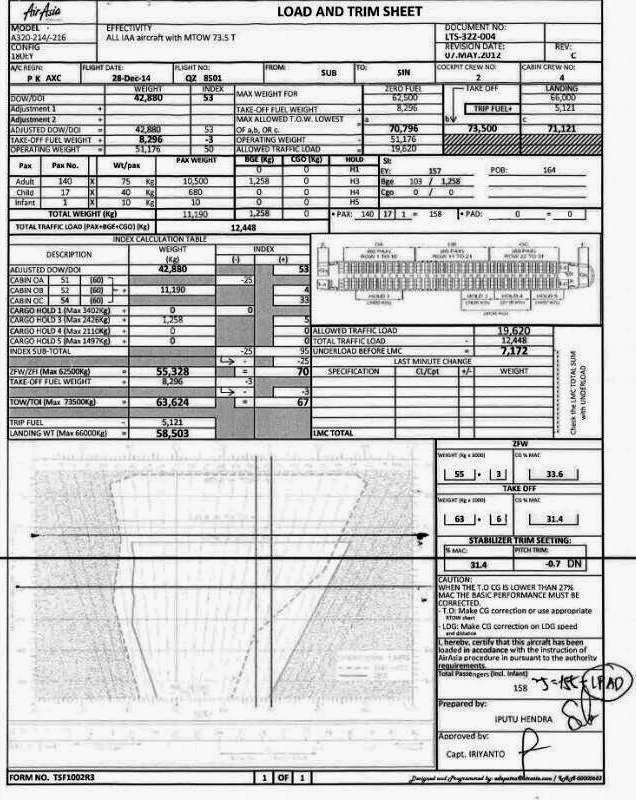