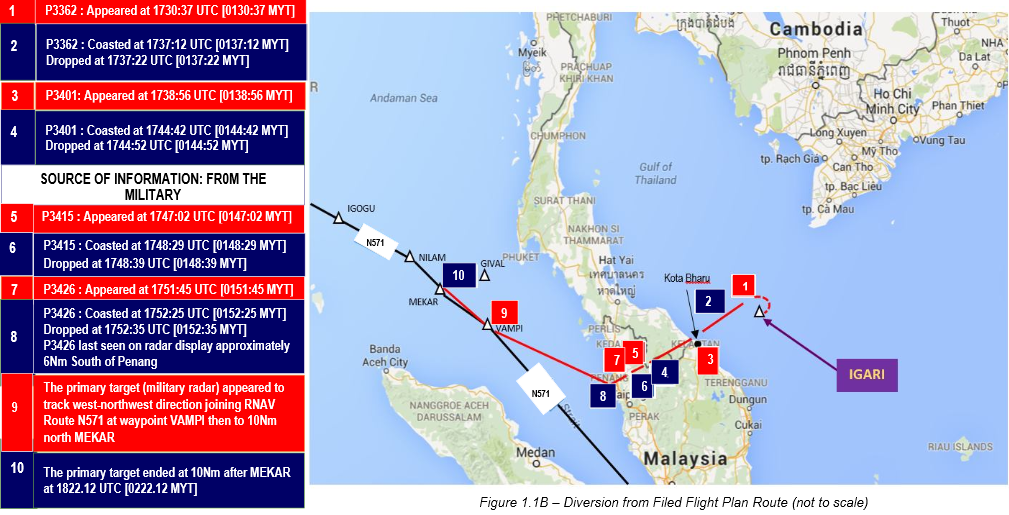 On March 8th, 2015 the Malaysian Ministry of Transport (MOT) published its Interim Report in accordance with ICAO rules. There is not a lot new in the report as far as progressing the search for MH370. The Interim Report consists of an accompanying statement and a factual document totalling almost 600 pages, mostly consisting of technical data, repair records, radar charts and full work details of the crew.

Here some of the main points:

1. There is little here that the MOT and DCA in Malaysia could not have made available in the preliminary report.

2. The radar charts represent the data collected but are not the original radar data shots.

3. There is little factual detail backed up with explanation on the Inmarsat data and how it was deciphered, calculated and delivered, considering the entire search is based on this.

4. One of the most welcome aspects of this report is finally having all the ATC transcripts from centres and the full audio communication received from MH370.

5. The report (as near as any report can at this stage) finds no evidence that the Captain and First Pilot are suspected of wrongdoing and no evidence for suspicion of crew hijack. In regards to this, the report is in stark contrast to what Malaysian authorities were alluding to for months after the loss of MH370.

6. Unfortunately the report does not resolve the missing manifest NBR01, which may or may not refer to the baggage containers. We may never know. But what it does do is show where every piece of cargo was stored on the plane, including a consignment of Lithium batteries.

7. The lithium battery cargo was stored mid to front in the cargo bay and the containers in front were left empty.

8. The ATC transcripts reveal a chaotic period of confusion lasting nearly four and a half hours after contact was lost with MH370.

9. The ping beacon in the Flight Data Recorder may or may not have been replaced. It highlights more a failure of maintenance computer systems at MAS than it does a fact that the aircraft was flying with a dead or weak FDR beacon battery. The potential dead battery had no impact with the FDR's ability to function and record data during the flight. The MAS system records the FDR beacon as due for replacement, but doesn't have a computerised report signed off to show it was carried out.

10. The real question to ask, if the pinger beacon on the FDR was weak or expired, is what impact would this have had on earlier searches conducted? It leaves the possibility that the FDR may have been present in an area searched in March/April 2014.

11. Once again, and not the first time, MAS seem to be changing their data records on what was reported in the first weeks and months of the search.

12. There is little or no reference to the search itself, and drift patterns of debris and pronouncements made last year about where debris should wash up if the SIO is in the right area. After one year, I'd expect a little more conviction in a report as to the validity of its search and what it is based on.


The search is set to conclude in May 2015 with approximately 44% of the priority search area covered. The head of the MH370 investigation and Malaysian government haver indicated that if the current search concludes with no evidence, then a period of re-assessment of all available data may occur before the next phase of the search is agreed.


Full text of the statement that accompanied the interim report can be found here.