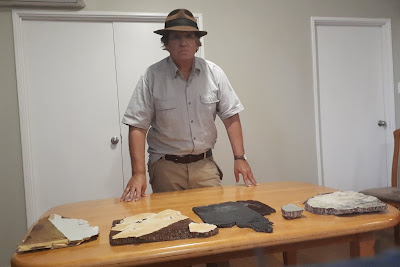 Today relatives of passengers and crew of missing flight MH370 met with the Malaysia Transport Minister, Anthony Loke Siew Fook, to hand over five more suspected pieces of MH370 debris found by members of the public on the island of Madagascar. The small debris pieces were found between December 2016 and as recently as August 2018 and followed a public awareness campaign visit undertaken by several relatives during 2016.
Malaysia Airlines flight MH370 disappeared on March 8th, 2014 while traveling from Kuala Lumpur to Beijing. The Boeing 777-200ER was carrying 227 passengers and 12 crew. The aircraft is believed to have turned back off the coast of Malaysia 40 minutes after departing Kuala Lumpur International Airport, failed to contact Vietnam Air Traffic Control, and inexplicably flew for a further seven hours into the southern Indian Ocean without normal communications (radio and data reporting) except for a series of satellite pings (or handshakes) recorded by British company Inmarsat. Despite initial and extensive sea surface searches over a period of eight weeks and two subsequent underwater seabed searches covering almost a quarter of a million square kilometers in the Indian Ocean, no seabed wreckage site has ever been discovered.
However, since July 2015, 15 months after its disappearance, fragments of aircraft debris have been discovered on the coast of Africa and island states to the east like Reunion, Mauritius and Madagascar. Other debris pieces have been discovered on the coasts of Tanzania, Mozambique and as far as South Africa.
Officially, some 35 pieces of debris have been passed (or they are aware of) to the Annex 13 Safety Investigation Team. Two pieces remain under a criminal investigation in Madagascar following the assassination of  Malaysia consular Zahid Raza in the capital Antananarivo just before he was due to hand over the debris to a DHL depot for transport to Malaysia authorities. Police on the island of Madagascar do not believe Raza's assassination was related to the case of MH370. One other piece of debris, a right wing flaperon found on Reunion island, remains under the judicial custody of France, though it has be conclusively linked to 9M-MRO, the registered aircraft servicing flight MH370. Other debris examined by the Australian ATSB have also been identified as belonging to 9M-MRO or 'almost certain' to belong to it through part numbers, serial numbers, maintenance records or logo and stencil evidence.
One of the five pieces of debris delivered today by relatives to the Malaysia MOT has already been identified by Independent Group (IG) investigator Don Thompson. He quickly spotted a partial quality placard ID and discovered that the debris was in fact a floor panel used by Boeing in its 777-200ER production (BAC27WPPS61). Thompson's analysis report is available here and he has corroborated his findings with floor debris from the Ukraine crash site of MH17 bearing the same placard marking.
This latest debris is again small and highly fragmented. Internal and external. It consistently supports the hypothesis that flight MH370's end was catastrophic and a high-speed sea impact. There is simply no other conclusion to reach and speculative and fanciful theories of some form of slow-speed ditching are increasingly looking unfounded without any evidence to support them.
In July 2018, the MH370 Annex 13 Safety Investigation Team, headed by Kok Soo Chon (who attended the relatives' debris handover and press conference), delivered a full report from his investigation team but could provide no definitive conclusions about the missing flight and what caused the events of March 8th, 2014. His team could only conclude that investigators do not know what happened to the Malaysian Airlines plane and third-party interference could not be ruled out, but they found no evidence to support nefarious actions.
Minister Loke and Annex 13 lead Kok were somewhat muted today. There was little to be said beyond the consistently stated line that a new search must be approved by the Malaysia government cabinet, regardless of whether it a 'no-cure, no-fee' or not, and that a new search cannot begin without 'credible evidence' being produced and leads directly to the seabed wreckage. The implication is that the Malaysia authorities now want to be externally hand-held by independent parties and groups and almost taken to 'X' marks the spot without further effort on their part.
Today, you sensed that Loke was hosting a press conference at the MOT HQ for the relatives, like a reluctant host throwing a party he never wanted to have in the first place, but felt his office (work home) was somewhat duty bound. Once the photographs were taken for the gathered press, the small pieces of debris laid out on a polished wooden table, there came a few limited words, and then he slipped away out of view and reminded the relatives that this was their press conference with a wave of the hand on his turf. A kind of subtle - I'll leave you to it, so.
And that is the way the relatives of 239 passengers and crew have felt for the past four plus years. We're done - we'll leave it to you and everybody else, and don't expect too much.
For now, I will leave it with the words of Sher Keen, president of Aircrash Support Group Australia (ASGA)...

On a no find no fee basis why on earth does there need to be new credible evidence? That's just bullshit, Malaysia has absolutely nothing to lose and everything to gain. If it were the government actually funding a search then their requirement for more solid evidence would be understandable, but this reluctance, when there's no cost to them is not the actions of a government that truly wants to find their aircraft.