Manufacturing of Boeing Aeroplane in Factory 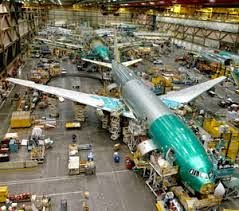 In 1967, the Boeing Everett, Wash., facility opened for business to produce the historic 747 jumbo jet. Now, more than 40 years later, Everett employees are making history again as they design and manufacture the company/s newest twin-aisle airplane, the 787 Dreamliner. The Boeing partnership with the Everett community didn't begin with jetliners, though. During World War II, the company operated two facilities in Everett to provide subassembly support for the B-17. This included work on bulkheads and the radio operator's section.
In October 1956, employees building jigs and shipment fixtures for the B-52 and KC-135 programs moved their operations to Everett. The move involved transferring 283 employees from the Seattle and Renton, Wash., plants and hiring 70 new employees from the Everett community. The employees occupied facilities at the Everett-Pacific Shipyard.
In March 1957, the Everett community officially welcomed Boeing by celebrating "Boeing Week." Storefronts featured Boeing displays, and The Everett Herald ran a special "Welcome to Boeing" supplement. Boeing President William M. Allen attended a special Boeing Week banquet, which included speakers from the Air Force and the Everett community. A congratulatory message was read from U.S. Sen. Henry M. Jackson.
In March 1966, the Boeing board of directors decided to proceed with an ambitious airplane program, the 747 jumbo jet. The program was launched officially the following month when Pan American World Airways announced a $525 million order for 25 747s. The huge jetliner would require special production facilities, so in June 1966 the company purchased 780 acres adjacent to Paine Field in Everett. In January 1967, the first production workers arrived at the Everett site. On May 1 of that year, the major assembly buildings opened. Boeing and its Everett employees made world headlines on Sept. 30, 1968, when the first 747 rolled out of the factory. The first flight of the 747 took place Feb. 9, 1969. Since then, more than 1,400 747 airplanes have been built, all in Everett. Now, employees are assembling the newest versions of the airplane, the 747-8 Freighter and 747-8 Intercontinental.
The site's second jetliner program, the 767, got under way in July 1978 when United Airlines ordered 30 of the new twin-aisle airplanes. From 1979 to 1980, the Everett site expanded to accommodate the new program. The first 767 rolled out of the factory in August 1981, followed by first flight on September 26 of that year.
The Boeing 777 program was launched in October 1990 when United Airlines ordered 34 of the new jetliners, with options for 34 more. In July 1991, Boeing received the first construction permit to begin a major expansion of the Everett site, primarily to support the 777 program. This included a 50 percent increase in what was already the largest (by volume) building in the world. Construction was completed in October 1993. Ceremonial rollouts of the first 777 took place April 9, 1994. Approximately 100,000 employees, guests, customers and suppliers attended the events. The first flight of a 777 took place June 12, 1994, and lasted nearly four hours.
In April 2004, the Boeing board of directors approved the formal launch of what was then called the 7E7. All Nippon Airways placed a firm order for 50 7E7s, the largest launch order ever for a new Boeing jetliner. In January 2005, the airplane received a new model designation to become the 787 Dreamliner. As the first airplane largely made with state-of-the-art composite materials, the 787 promises less waste, more durability and a better passenger experience (with lower cabin altitude and higher humidity). Using 20 percent less fuel on a per-passenger basis, the 787 is the most fuel-efficient twin-aisle airplane available. The first 787 made its inaugural flight in December 2009.
From 2005 to 2009, the Everett site implemented the Future Factory project to create new, open and desirable work areas in the main factory building. The goal was to enhance collaboration, improve the employee experience and support overall production efficiencies. About 4,000 people moved into 600,000 square feet (55,741 sq. m.) of renovated space in five office towers.
Renovations included Tully's Coffee cafes, new and upgraded cafeterias, employee service centers and 35 skylights. Separately, the Everett Delivery Center was remodeled with a new second-story observation deck overlooking the flight line; new customer offices, conference rooms and common areas; a Tully's Coffee café; and renovated crew shelters on the flight line. 
The Future of Flight Aviation Center & Boeing Tour debuted in December 2005. With developments in aviation technology coming at an ever-quickening pace, Boeing, Future of Flight Foundation, Snohomish County Public Facilities District and the Snohomish County Airport (Paine Field) joined forces to create an interpretive center so visitors could glimpse the future of commercial aviation. By incorporating and expanding the existing Boeing Tour, the Future of Flight offers an opportunity to see both commercial airplane production today and the direction aviation is headed in the future.
(via Boeing.com)