A Renewed Search, A New Company, But the Search and Questions Go On For MH370 Families 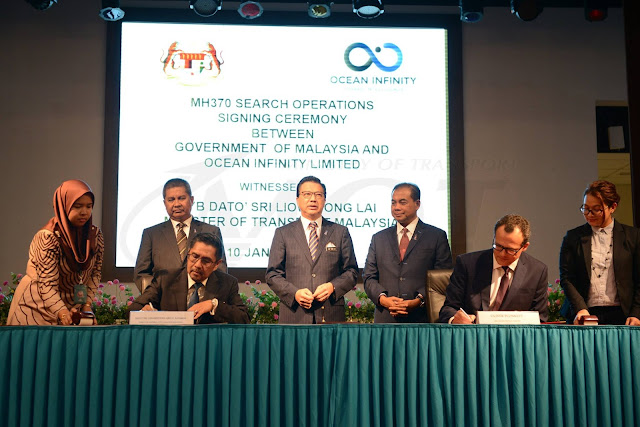 Last week the Malaysia Ministry of Transport (MOT) and its Department of Civil Aviation (DCA) signed a deal to pay a Houston-based seabed exploration company, Ocean Infinity, up to $70 million (USD) if it is successful and finds convincing and credible proof of where the seabed wreckage of missing Malaysia Airlines flight MH370 lies. And the contractual caveats? Ocean Infinity, and the 65-strong crew of its leased vessel, Seabed Constructor, must do it within 90 days of reaching the newly designated search area, identified by the ATSB and its partners when it published its Final Search report at the end of 2017. This area includes a 25,000-sq-km priority area and potentially beyond (separated into four divisions: primary, subsequent, tertiary and supplementary).

The public may not be aware that slides were presented at the contract announcement and media event.

But there are a few more catches to this deal. It is based on what is known in the marine industry as ‘no cure-no fee’ – if you turn up nothing, you get nothing, and Ocean Infinity and its financers and shareholders will have to bear the brunt of all the operational costs, upfront. Oh, and Malaysia Transport Minister, Liow Tiong Lai, insists that this will also mean that Ocean Infinity must provide proof of aircraft seabed wreckage – without removing it from the seabed, unless Malaysia gives the okay – and convince Boeing, the manufacturer in Seattle, that it is from the ill-fated aircraft, registered 9M-MRO, the very Boeing 777-200ER which operated flight MH370 on the morning of March 8th, 2014 from Kuala Lumpur to Beijing. So, no indistinct blurry images or ‘yep, it’s definitely down there – we saw it’ will see a single cent exchanging accounts with a spit and a handshake.

It’s not a position Fugro Worldwide found itself in when in 2014 it was awarded the tender by the three primary nation partners involved (Malaysia, Australia, China), and Australia’s ATSB was tasked with overseeing the operational activities and search that covered initially 60,000-sq-km, later expanded in 2015/16 to 120,000-sq-km. Indeed, though constantly dealing with seasonal weather, a search that once began with four vessels – then there was one – and an extensive bathymetric seabed scan before towfish sonar could be deployed, Fugro never had a time constrain beyond getting the job done and finding the aircraft resting place.

Undeterred, and much to the credit of the Dutch-based company, Fugro, it did offer to search again, considering it had the experience and at least one vessel in place. The initial seabed search came to its conclusion in January 2017. Malaysia mulled and became silent but for another interim report on the third anniversary, which told the world little or nothing more, and then it fell silent for months.

VOICE370
Voice370, the official family support group for relatives of those on board MH370, began to sense an impending and permanent limbo, despite that the previous 12 months had seen the discovery of multiple pieces of debris on the east coast of Africa – some proven to be from 9M-MRO, some ‘almost certainly’, a few very likely to be aircraft composite pieces, still many pieces unknown and likely always to remain that way. The most significant pieces discovered were a flaperon, an outboard wing flap, and the now almost infamous ‘NO STEP’ and the painfully but humbly-referred-to piece of debris called ‘ROY’ (part of the engine cowling casing from one of Rolls Royce’s Trent 800s sporting its emblem manufacturer RR badge).

In a world where there has been so little information, so little data, so many unanswered questions, some of the relatives of MH370 took solace in being able to meet the crew of Fugro’s search vessel, the ATSB, and witness the outboard flap found in Tanzania in 2016 in Canberra, Australia later that year. Just to be in the ATSB’s facility, in the same room as a piece of 9M-MRO, was both a profound and upsetting experience to be so close to something which had itself been close to their loved ones on the morning of March 8th, 2014.

But Voice370 grew frustrated with the lack of information from Malaysia, increasing delays with debris being picked up from local civil aviation authorities and at the time of the third anniversary decided they would have to take matters into their own hands, having travelled to east Africa at their own expense to raise awareness about potential coastal debris, they began to reach out to aviation experts, oceanographers, wreckage hunters and influencers prepared to assist them in funding an independent search for the seabed wreckage and their loved ones.

While they began to reach out and explore this, they discovered that one company had already tabled an offer to the Malaysia government to search on, and it was not Fugro. Above all else, as the weeks and months passed, Voice370 discovered this offer was based on a ‘no cure-no fee’ basis. The group believed an announcement would surely be imminent. Then the ATSB released its final report, concluding new refinement of an area of 25,000-sq-km north of the original larger search site. Silence from Malaysia, a ministerial release that a tripartite meeting might happen, maybe October, maybe November, and they were preparing their own final report, maybe before the end of 2017. But nothing more.

Voice370 went public with what the little they knew about the offer by Ocean Infinity, but that it did exist and had for some considerable time. Ocean Infinity maintained its silence and continued to test its advanced AUV Hugin equipment. Sea wreck hunter David Mearns went public and made it clear he had been in contact with the group and was prepared to assist them with an independent search. David Gallo, of Woods Oceangrahic – which had been involved in the final search for Air France AF447 – joined the increasing pressure that something must happen and decisions needed to be made by those in charge of the investigation and search.

Ultimately, the lead investigative nation, Malaysia, knowing they had to deliver a Final Report to ICAO by mid January 2018, the one-year expiry after the official seabed search had been suspended, having somewhat slow-walked themselves down a dead-end alley, succumbed to the pressure, announced that, yes, they had been considering three possible offers of continuing the search, but had a preference for one. A lull of several weeks late 2017 was followed by an announcement that the Malaysia interior cabinet had approved the potential release of up to $70m, but only on the understanding a new search would be successful.

Almost immediately, Ocean Infinity, a company that did not exist a year ago, with a 6-year lease on a vessel called Seabed Constructor, which had been testing its 6 Hugin AUVs in the south English Channel, returned to Bristol port, and then departed across the Atlantic Ocean. The Chess Game began.

OCEAN INFINITY
Malaysia stalled on a decision. Ocean Infinity upped its game, rolling out social media and website updates to show off its technology and that it was far ahead of what had already been deployed on previous sea search missions. Then at SUT, Senior Advisor Survey & AUV Operations Director at Swire Seabed (Norway), Jan-Ingulfsen, laid the path for Ocean Infinity, and it became very apparent that Ocean Infinity had very significant financial backers and stakeholders behind it, notwithstanding its existing partnerships with SeaTrepid and others. This was no longer a misty farm on the hills in winter with flying pigs and promises of a crock of gold at the end of the rainbow. One of the first questions Minister Liow asked Ocean Infinity in November in London was – can you assure us you can finance this and that it will not fail because you ran out of money? We cannot provide money at the end if you do not have it all at the start. He got his answer at that meeting. And the deal was done, bar him having to convince his cabinet colleagues a few weeks later. This was always shaping up to be a with or without you.

By the time of reaching Durban port, Ocean Infinity’s vessel, Seabed Constructor, received two new Hugins, which were loaded, as well as the vessel receiving Inmarsat high-grade antennas to its hull in dry-dock. The vessel departed Durban to conduct two sea trial tests, critically, to deploy all eight Hugin AUVs at one time and test the full operation, and to test them all at depths of up to 6,000 metres. As of January 13th, these tests went well; though Ocean Infinity reported some minor glitches, and they decided to remain in the test area to resolve these first. This meant backtracking on some test areas to ensure everything was working. The vessel then departed for the priority search area late January 13th and is expected to arrive there around the 20th/21st, a few days after they had hoped to arrive. However, given the 90-day timeframe, Ocean Infinity does not believe this will play any factor. They are hoping to complete the first phase of search within 26-28 days, but this will require one visit back to port to resupply.
SEARCH DETAILS
Ocean Infinity will be paid $20 million if the plane is found within 5,000 sq km, $30 million if it is found within 10,000 square km and $50 million if it is found within an area of 25,000 square km. Beyond that area, Ocean Infinity will receive $70 million.

I appreciate some of the below details may be difficult for some NOK, but the reality is that this search must have priorities, and any search after this period of time must have technical priorities. The priority is to locate – first the wreckage site, then to identify the data flight and cockpit recorders. If successful, Ocean Infinity will then, if time allows, try and grid the area.

Ocean Infinity will require authorisation to extract anything from the site, even though they have some equipment capable of doing that for small objects like the recorders. That authorisation will remain with the Malaysia government. Difficult as this is, extraction of human remains is not part of this search phase and will be dealt with at a later date when a full grid is provided of the seabed wreckage and an agreed salvage plan is implemented.

THE SEARCH OPERATION
Seabed Constructor carries eight AUVs (autonomous underwater vehicles) that will search the seabed with scanning equipment for information to be sent back for analysis. Once the AUVs are recovered by Seabed Constructor (SC), the data is downloaded onboard the vessel.

SC has 65 crew and almost half of Ocean Infinity’s staff (about 20) is onboard the vessel. There are two government representatives drawn from the Malaysian navy who will act as monitors for the Malaysia government. Some of SC’s crew also work for Swire and SeaTrepid because they have extensive experience working with this equipment. Like Fugro’s vessel staff, they are deeply committed to this and we should not underestimate the day-to-day risks they take. They have been training and preparing for this for months.