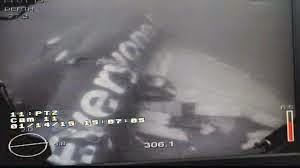 The Indonesian Ministry of Transport and investigators have begun to release some details about the final minutes before AirAsia Flight QZ8501 crashed into the Java sea o the morning of December 28th, 2014.


06.12 - QZ8501 request an ascent to FL380 from their current FL320 due to a weather front ahead. That's a big ask for any pilot when they have already adopted the flight's cruising altitude.


06.12 - Climb request is denied by ATC due to traffic above them and asked to 'STANDBY' for further instruction. It will be interesting if the information released next Wednesday from the non-public preliminary report discloses what communication ATC had with other traffic over the next two minutes as they try to clear an ascent for QZ8501. There have been reports in the media that Indonesian ATC is sometimes slow to respond to requests of course and altitude changes in their airspace. I've seen one media report delays of up to 25 mins. I think some of these media reports are mischievous because I've seen no evidence of it. The information already available means it certainly DID NOT happen in this case.


06.17 - ATC have now tried 8 times to get confirmation of their last instruction to QZ850 in the space of three minutes.


06.17 - ATC formally declares radio contact with QZ8501 lost. Again, it will be interesting to see what procedure ATC followed at this point.


06.17 (09 secs) - QZ8501 is tracked climbing 300ft in 6 seconds. I don't see anything untoward here, as such. It could have been an updraft, or the cockpit crew now acting on the instruction to climb to FL340, but too busy struggling with an aircraft in difficult conditions. Pilots are trained to control first, then communicate.


06.17 (24 secs) - QZ8501 is tracked climbing 1700ft in 6 seconds. I'm not a radar expert, but the 6 seconds bursts are lightly the radar screen updating with the latest information on the movement of the aircraft. Some of this information is also likely coming from the parameters taken from the Flight Data Recorder recovered. The dramatic climb would have alerted ATC that something isn't right with QZ8501.The ascent is abnormal. It should be steady and gradual.


06.17 (41 secs) - QZ8501 is now at FL360, 2000ft above the advised level from ATC, and 4000ft above its original flight level. The information so far revealed is not exactly clear on WHEN QZ8501 started ascending. The data would suggest it coincided around 06.14 when ATC cleared it to climb but the crew didn't respond and confirm. But I would still like to see data confirming when exactly QZ8501 began climbing - before or after ATC's instruction.


06.17 (54 secs) - QZ8501 is now tracked at FL376. It ascended another 1600ft in 13 seconds. Aircrafts like the Airbus 320 climb normally about 1000-1500ft per minute. If QZ8501 started ascending at 06.14, then it should normally have been at 3000-4500ft above FL320 (FL350 to FL365). It's the bursts of climb in a short space of time that concern me, not the actual altitude the aircraft reached. Yes, the crew have breached the flight level advised, but pilots have to deal with the situation they are in, and the climb is not just about the rate of ascent, but the attitude (angle of ascent) and speed the aircraft was travelling at. If QZ8501 started ascending instead at 06.12, right at the time it requested FL380 due to weather conditions, then the rate of ascent is not nearly as odd as first noted. The real rate of ascent vs speed and capabilities of the A320s climb ceiling of QZ8501 can only be ascertained is if the investigators reveal the parameters from the FDR. Only then we will know if QZ8501 was climbing way outside the recommended capabilities of the A320.


But the greater questions here are why the flight crew attempted a steep climb above a storm front in the area rising to 50,000-53,000ft, how briefed were they on what lay ahead, and was their A320 giving them the correct airspeed and attitude of the aircraft. Accidents like this are normally due to a combination of events, never just one, and I don't believe weather alone took this aircraft down.
06.18 - QZ8501 is now in descent. The aircraft has dropped 1500ft in 6 seconds. It will continue to reach a fall rate of 7900ft per minute. That kind of descent will alert the STALL warning and it's likely the warning was already sounding in the cockpit long before the aircraft actually began to fall. This is a strong indication of engine flame out (the engines simply can't function anymore with the rate of previous ascent and attitude of the aircraft). There will also be other master control warnings sounding and flashing in the cockpit to do with speed and engine failure. The aircraft FMS (Flight Management System), which controls the various auto-pilots, will have already handed back critical manual control of the aircraft). It simply cannot deal with the 10s, probably hundreds, of error warnings in the system.


06.18 - QZ8501's descent is so rapid, radar loses tracking of it at FL240. The aircraft's descent from FL376 likely lasted nothing more than 2 to 3 minutes. There is simply no time to alert the passenger cabin staff to a water impact. And, yet, somehow, the captain of this aircraft somehow managed to clearly wrestle back some control. The debris site and condition of the main fuselage suggests some attempt to put the aircraft in the water in a lateral position, rather than nose-in, which is devastating on impact. The tail broke off first, whether due to tail-in impact with the surface of the Java sea, or the tail literally breaking off with the high rate of descent. The first recovered debris came from the rear of the aircraft - a maintenance case kept in the rear tail; the first bodies from the rear; an emergency rear door blown outwards on breakup or impact or shortly before the aircraft impacted; the evacuation inflation raft on the rear door was not inflated; and the unit to activate inflation was also recovered.


Weather has not been great in the Java sea over the past two days, but efforts are on-going to refloat the main fuselage tomorrow with large inflatable air bags. 5 bodies were recovered today close to the main fuselage, still strapped to their seats, and without life jackets.


Let's us hope all victims of QZ8501 are finally returned to their families where they belong. And let us hope that QZ8501, while our skies are often the safest places to be than the road to the airport, that we refrain from finger-pointing and fix the things that need to be addressed in the aviation industry.
Posted by Mick Rooney at Thursday, January 22, 2015